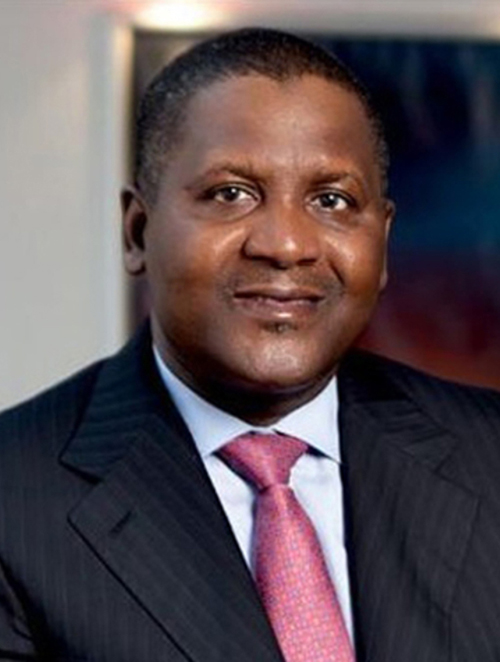 Aliko Dangote is the founder and president/chief executive of the Dangote Group, the largest conglomerate in West Africa. The Group currently has a presence in 17 African countries and is a market leader in cement on the continent. One of the Groups subsidiaries, Dangote Cement Plc, is the largest listed company in West Africa and the first Nigerian company to join the Forbes Global 2000 Companies list.

The Group has diversified into other sectors of the Nigerian economy including agriculture and is currently constructing the largest petroleum refinery, petrochemical plant and fertilizer complex in Africa.

Internationally, Dangote sits on the board of the Corporate Council on Africa and is a member of the Steering Committee of the United Nations Secretary-Generals Global Education First Initiative, the Clinton Global Initiative, the McKinsey Advisory Council, and the International Business Council of the World Economic Forum. He was named Co-chair of the US-Africa Business Center, in September 2016, by the US Chamber of Commerce. In April 2017, he joined the Board of Directors of the Clinton Health Access Initiative, which is helping countries build the systems necessary to provide health services to their people.
A dedicated philanthropist, Dangote made an initial endowment of $1.25 billion to the Dangote Foundation in March 2014, enabling it to scale up its work in health, education and economic empowerment. In addition, he is collaborating with the Bill and Melinda Gates Foundation to fight polio. He is also on the Board of ONE, the anti-poverty group, co-founded by Bono.